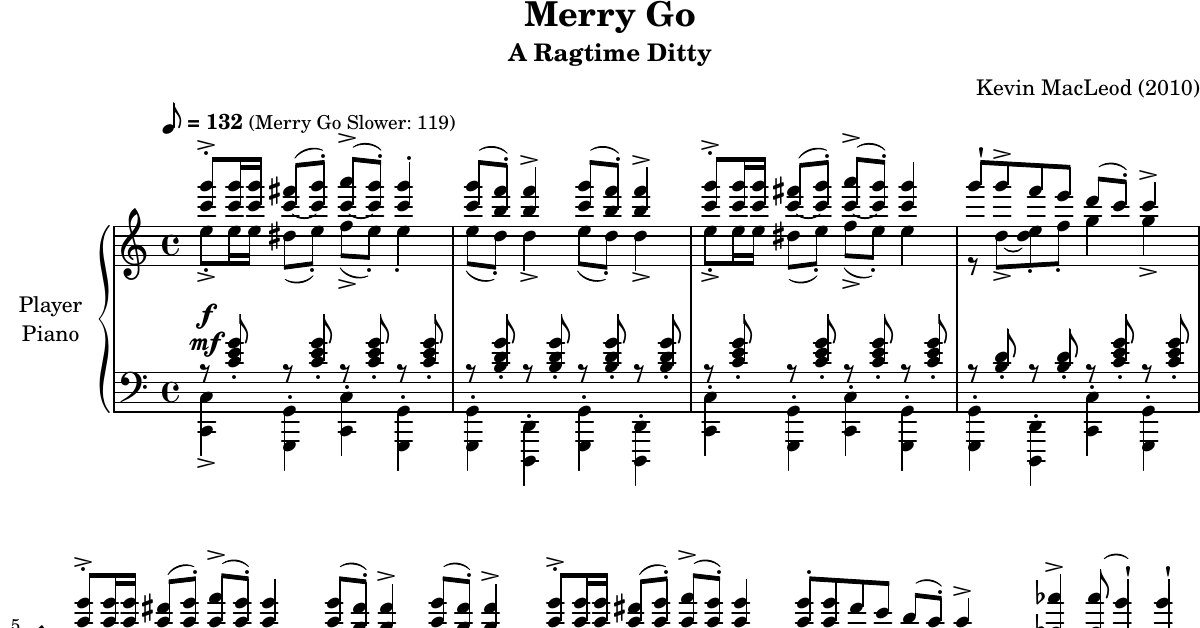 If you’ve watched enough compilation videos on YouTube, it is likely you’ve heard Merry Go, a fast-paced, 2-minute ragtime-ish piano song published by Kevin MacLeod in 2010. It is one work out of a large body of high quality digital music that Kevin shares under the Creative Commons By 3.0 license, for anyone to use for any purpose, royalty-free. Not surprisingly, his music has become some of the most-used background filler on YouTube.

Here is a video of the audio of Merry Go by itself (because people upload stuff like that).

Depending on your mood and temperament, Merry Go can be either energizing or irritating. Because of the latter, someone had to do it: here is a video of the song playing for 10 hours. There is also a 1-hour version, a slowed-down version, MIDI transcriptions, and others.

Watching a useless video late one night, this song played, and it piqued my interest. Its use of sforzandos and staccatissimo is striking. It’s fast, but sounds simple enough. I decided to attempt a sheet music transcription. However, I quickly found out that the apparent simplicity belies a greater complexity than one would expect. There are a lot of notes! It got even more interesting as I discovered its origin..

A reproduction aiming for fidelity to the original would be most suitable for performance by MIDI and/or player piano. It is impossible to play on solo piano.

Using the Transcribe! software, I listened to Merry Go for hours in excruciating detail, at different speeds and octave shifts, in order to generate a transcription. To test for the presence of specific notes, I would listen carefully while hitting them on a keyboard while simultaneously looping short snippets of the audio, often just individual chords. There are several things that limit how accurately the notes can be divined. Some chords contain upwards of 10 simultaneous tones. Very quiet or low tones may get drowned-out. Artifacts of digital encoding and frequency scaling through re-sampling filters result in ghostly sonorities and sympathetic octave blurring. It took four or five passes/editions before I was satisfied I hadn’t missed too much. Nevertheless I’m sure Mr. MacLeod would cringe.

Having written out the initial transcription on music staff paper, I then coded it as a text file in the GNU LilyPond music description format. LilyPond is an amazing piece of software that reads a description and generates beautiful typeset sheet music in PDF format, as well as generating MIDI output. There is a big learning curve, however. I’m sure it comes a lot more naturally to people who are already experienced computer programmers. But if you are a geek who needs to typeset music, you need LilyPond!

Here is the resulting MIDI output. Dynamics processing by LilyPond is somewhat rudimentary and leaves something to be desired. As with everything else in LilyPond, perfection is possible given enough time (worst case, it’s open source!)

You can play the MIDI file in your browser using the tools from www.midijs.net, but it doesn’t sound as good as native players.

And of course the PDF sheet music.

Finally, for the curious, or those who might want to tweak further, the LilyPond source file, under the same license.

Please have a Merry time with it and comment below.

UPDATE! Read about the duet version!